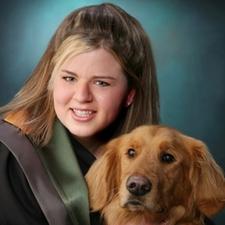 Following graduation from AVC in 2010, Dr. McGee took a job with the Maine Department of Agriculture’s Harness Racing Committee and shortly after, with a mixed animal practice in central Maine. She joined the Hometown team in July of 2014 and enjoys working with companion animals as well as livestock.

Amy is an active member on her family farm in West Gardiner where they raise purebred beef cattle, swine, and sheep. She is a 4-H alumni and grew up showing sheep, oxen and beef cattle. Amy can often be found working with 4-H clubs throughout the state, judging livestock shows all over Maine and New Hampshire, or tending the animals in her own barn. Her nieces, nephews and/or dogs Olivia and Pip are often not far behind her!