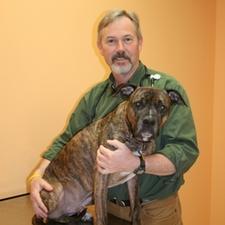 Dr. Peter Walsh grew up on a family farm in the Annapolis Valley of Nova Scotia, where his family still farms today. Dr. Walsh has been practicing in the area since graduating from the Atlantic Veterinary College (AVC) at the University of Prince Edward Island in 1993. Besides his DVM degree, he also has a B.Sc. (Agr) from the University of Guelph, as well as a M. Agr. Sc. From Massey University in New Zealand.

Over the years, Dr. Walsh has worked at various area practices, both as an associate as well as an owner. Although he has an extensive background in agriculture, Peter spends most of his time at Hometown Veterinary Care in the clinic caring for small animals (cats and dogs).

Dr. Walsh is a resident of Oakland, where he lives with his 3 children, 2 cats, and his ever-faithful and constant companion “Bob” the dog. Other interests include hockey, boating, and horses.